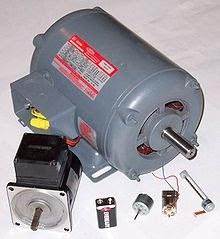 Electric motors are found in applications as diverse as industrial fans, blowers and pumps, machine tools, household appliances, power tools, and disk drives. They may be powered by direct current (e.g., a battery powered portable device or motor vehicle), or by alternating current from a central electrical distribution grid. The smallest motors may be found in electric wristwatches. Medium-size motors of highly standardized dimensions and characteristics provide convenient mechanical power for industrial uses. The very largest electric motors are used for propulsion of large ships, and for such purposes as pipeline compressors, with ratings in the millions of watts. Electric motors may be classified by the source of electric power, by their internal construction, by their application, or by the type of motion they give.

The classic division of electric motors has been that of Alternating Current (AC) types vs Direct Current (DC) types. This is more a de facto convention, rather than a rigid distinction. For example, many classic DC motors run on AC power, these motors being referred to as universal motors.

Rated output power is also used to categorize motors, those of less than 746 Watts, for example, are often referred to as fractional horsepower motors (FHP) in reference to the old imperial measurement.

The ongoing trend toward electronic control further muddles the distinction, as modern drivers have moved the commutator out of the motor shell. For this new breed of motor, driver circuits are relied upon to generate sinusoidal AC drive currents, or some approximation thereof. The two best examples are: the brushless DC motor and the stepping motor, both being poly-phase AC motors requiring external electronic control, although historically, stepping motors (such as for maritime and naval gyrocompass repeaters) were driven from DC switched by contacts.

Considering all rotating (or linear) electric motors require synchronism between a moving magnetic field and a moving current sheet for average torque production, there is a clearer distinction between an asynchronous motor and synchronous types. An asynchronous motor requires slip between the moving magnetic field and a winding set to induce current in the winding set by mutual inductance; the most ubiquitous example being the common AC induction motor which must slip to generate torque. In the synchronous types, induction (or slip) is not a requisite for magnetic field or current production (e.g. permanent magnet motors, synchronous brush-less wound-rotor doubly-fed electric machine).

The power output of a rotary electric motor is:

Where P is in horsepower, rpm is the shaft speed in revolutions per minute and T is the torque in foot pounds.

And for a linear motor:

Where P is the power in watts, and F is in Newtons and v is the speed in metres per second.

To calculate a motor's efficiency, the mechanical output power is divided by the electrical input power:

In simplest case Pe = VI, and Pm = Tω, where V is input voltage, I is input current, T is output torque, and ω is output angular velocity. It is possible to derive analytically the point of maximum efficiency. It is typically at less than 1/2 the stall torque.

Professor Eric Laithwaite proposed a metric to determine the 'goodness' of an electric motor:

From this he showed that the most efficient motors are likely to be relatively large. However, the equation only directly relates to non permanent magnet motors.

Electric motors are used in many, if not most, modern machines. Obvious uses would be in rotating machines such as fans, turbines, drills, the wheels on electric cars, locomotives and conveyor belts. Also, in many vibrating or oscillating machines, an electric motor spins an irregular figure with more area on one side of the axle than the other, causing it to appear to be moving up and down.

Electric motors are also popular in robotics. They are used to turn the wheels of vehicular robots, and servo motors are used to turn arms and legs in humanoid robots. In flying robots, along with helicopters, a motor causes a propeller or wide, flat blades to spin and create lift force, allowing vertical motion.

In industrial and manufacturing businesses, electric motors are used to turn saws and blades in cutting and slicing processes, and to spin gears and mixers (the latter very common in food manufacturing). Linear motors are often used to push products into containers horizontally.

Email ThisBlogThis!Share to TwitterShare to FacebookShare to Pinterest
Labels: Education