Ras Al Khaimah: With 12 turkeys frozen below deck, the HMS Cumberland set sail from the UK in the knowledge that it would be able to give the Royal Marines aboard a good Christmas lunch at sea.
"Christmas lunch is roast turkey, roast potatoes, carrots, parsnips, bacon and sausage rolls, Yorkshire puddings, homemade Christmas puddings, homemade mince pies. Then we'll do a cold buffet in the evening as well, because of the work schedule and the ship's programme as well," Petty Officer Caterer ‘Arthur' Daley told Gulf News from the ship's galley. 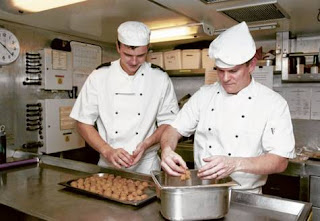 Currently, with the ship's schedule, the tiny kitchen serves the vessel's almost 300-strong personnel with meals four times a day, including one at midnight.

The crew, Daley continues, will take part in ‘secret Santa' ceremonies, in which each person makes a present worth £5 (Dh28.60) anonymously, after picking a colleague's name from a hat.
Unfortunately for the personnel aboard, Christmas Day will be the same as any other — apart from the special lunch, of course.

"We'll probably get some presents between here and our next port of call. We've also got some presents down below [deck] for the ship's company," Daley said.
HMS Cumberland docked in Ras Al Khaimah's Saqr Port last week on an official visit. The sailors took part in a training exercise with the UAE air force over the sea, and then spent time on land, taking part in a number of sporting activities.

A.B. Alex Hunter, Warfare Specialist, 18, has been on the ship for five months.
Working in the operations room in 12-hour shifts, he said that he tries to get as much sleep as he can, when he can.

"I miss my family now and again a bit, but mainly my mates and going to watch Derby play football at the weekend," the Briton from Derby said.

"I'm still looking at the internet for the results at the weekend, and still following them from the boat," he continued of his love of football.

Walker has followed in his cousin's and grandfather's footsteps after they also served in the navy. He signed up before he left school.

Engineer Grieve, a 21-year-old Marine Engineer from Glasgow, has been on the ship for two years. For Grieve also, spending most of his working day below deck in the engine room, football is something he really misses.
"I miss being out with mates and watching Glasgow Rangers play football. I'm not a great footballer, just watching," he said.
HMS Cumberland actually has four gas turbine engines that were previously used in aircraft but were adapted for marine duties. All four engines can be used simultaneously and the ship refuels at sea.
LAC (Leading Aircraft Controller) Edwin Elliott's daughter turned three years old while was at sea.
The 29-year-old father from Manchester conducts a flying brief and briefs the conducting officer on the aviation on a daily basis. "On completion of that we'll do some aviation checks to make sure that everything is good to go for the day and launch the aircraft to do a surface search," he said.
The Lynx Mark 8 aircraft onboard operate at 400 feet and fly at 120 knots: "Our main job is to direct them, to make sure nothing flies into the side of them or anything," Elliot said.
Missing the snow

Elliot bought a new car just before the Cumberland set sail. However, the thing he misses the most is "the snow. I would have liked to have been playing out with my daughter in the snow," he said.
Having to work on Dec-ember 25 doesn't mean he won't celebrate Christmas Day without his family, however: "I'm having a Christmas Day with my family when I get home in mid-March."
Considering home is Manchester, this means Elliot might not miss freezing conditions after all.

Pirate watch in Gulf of Aden

HMS Cumberland is the second of four Type-22 frigates, launched on June 21, 1986. It went into Royal Naval service on June 10, 1989 and in reality has the firepower of a cruiser.
The ship's displacement is 4,600 tonnes and it is 148.1 metres long. There have actually been 16 ships with the same name: the first one was commissioned in 1695 during the reign of William III. This first ship was an 80-gun, third-rate frigate carrying a crew of 600 men.
The modern Cumberland has been patrolling dangerous waters of late, countering pirate attacks in the Gulf of Aden.
While Commander Robert Pedre, Executive Officer and Second-in-Command, told Gulf News that he was not "at liberty" to discuss the specific procedures, he said: "you can be rest assured that we have robust measures to ensure the safety of legitimate users of the high seas."


Click to go to Source
Posted by Julius Maranga at 12:04 AM

Email ThisBlogThis!Share to TwitterShare to FacebookShare to Pinterest
Labels: News