What is a Marine Fresh Water Generator?

"Water, water everywhere, and nary a drop to drink." Old cargo ships from years back were required to carry large supplies of fresh water to sustain the crew on a long voyage. A ship that had run out of drinking water would be carrying a sad crew indeed. Today, most commercial ships are equipped with a freshwater generator, a type of evaporator that converts sea water into drinkable, fresh water.

The concept of a freshwater generator is simple; sea water is evaporated using a heat source,either by stream from the boiler, main engine jacket cooling water, or by electric coil separating pure water from salt, sediment and other elements. When the ship is underway, the heat from the cooling water of the engine is used. To minimize fuel consumption and maximize the heat generated by the main propulsion engine. 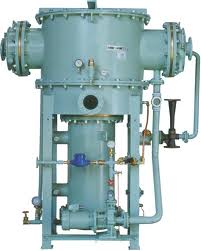 There are two main elements in a freshwater generator, one heat exchanger evaporates the sea water, and another condenses the fresh water vapor into drinking water. In the condenser element, the vapor is condensed through cooling, often simply using cold seawater to cool the outside of the unit.